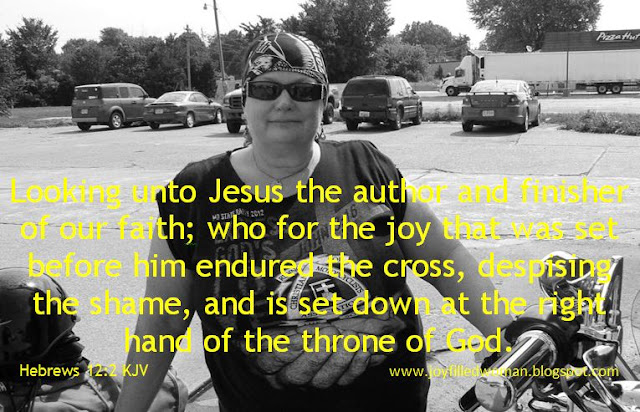 As a faith-filled woman of God, Jesus leads me each and every day. I willingly and obediently walk down his path for me.

Before my husband Jack died of inherited emphysema,
he asked me what I would do after he went home to Jesus. Jack knew I had owned and ridden a motorcycle before I had children. Additionally, he knew about the motorcycle fund I started the year my oldest daughter was in eighth grade. He wasn't surprised with my answer - I was going to buy another motorcycle and start riding again.

You see, when I rode a motorcycle before
I was a party girl who had an empty hole inside herself. The hole was where faith and Jesus are supposed to be. Speeding down Virginia highways on my bright red, 1981 Harley Davidson Sportster, drinking Jack Daniels whiskey, and attending all night parties was how I spent most of my off duty hours.

Fast forward to 2005
Here I was standing beside another bright red,1999 Harley Davidson Sportster. The moment I started that motorcycle and pulled out onto the highway, a short period of mid-life insanity began. I had no idea how to be a sober, Jesus loving, motorcycle gal. However, I continued to do two things:
1. I kept reading my bible, praying to Jesus, and keeping a prayer journal.
2. No matter where I traveled, I found and attended a 12 Step meeting.

Jesus continued to lead me each day.
I started seeing a woman about my age filling up her trike at the local gas station. I knew Jesus was leading me because this woman was wearing a patch on the back of her jacket and vest that showed a hand holding a bible. This is how I learned about Christian Motorcyclists Association. I attended a few Bible studies, went on a few rides, and learned more about Jesus lovin' motorcycle riders.

Now I had a living example to show me how to ride a motorcycle, love Jesus, and be sober. Through her, I met a half-dozen other ladies who all rode their own motorcycles, didn't drink, and loved Jesus. Even though I was off the narrow path for a time, Jesus continued to love His bewildered daughter who continued to pour out her pain and anguish to Him. Yep, this is when Jesus called me into motorcycle ministry.

I finally learned how much Jesus loves me.
He loves me so much that he died for me. We are not insignificant to Him. He died for me and he died for you.

"Jesus came into this world instead of being in the form of God, he appeared in the form of a servant; instead of the glory which he had with his Father from eternity, he suffered shame and disgrace; instead of living a joyful and comfortable life on earth, he suffered a shameful and an accursed death; and instead of the temporal joy and glory the Jews proposed to him, he endured the shame and pain of the cross:.. Christ underwent so much disgrace, and such sufferings; namely, for the sake of having a spiritual seed, a numerous offspring with him in heaven, who are his joy...set down at the right hand of the throne of God; Which is in heaven...here Christ sits as God's fellow, as equal to him, as God, and as having done his work as man, and Mediator"      Excerpt from John Gill's Commentary