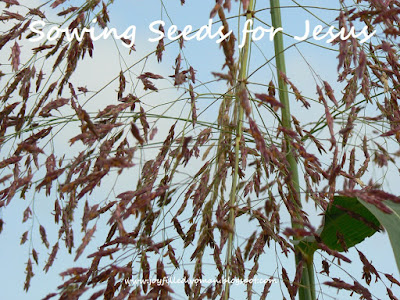 The picture above was taken while Bill and I were standing gate duty in Sturgis, Kentucky during the 2015 Kentucky Bike Rally. This lone plant, towering over the surrounding plants, caught my attention and reminded me of Jesus' parable about the sower and his seeds.


Parable of the Sower   Mark 4:3-9 AKJV
3 Listen; Behold, there went out a sower to sow: 4 And it came to pass, as he sowed, some fell by the wayside, and the fowls of the air came and devoured it up. 5 And some fell on stony ground, where it had not much earth; and immediately it sprang up, because it had no depth of earth: 6 But when the sun was up, it was scorched; and because it had no root, it withered away. 7 And some fell among thorns, and the thorns grew up, and choked it, and it yielded no fruit. 8 And other fell on good ground, and did yield fruit that sprang up and increased; and brought forth, some thirty, and some sixty, and some an hundred. 9 And he said to them, He that has ears to hear, let him hear.

Parable of the Sower Explained         Mark 4:14-20 AKJV
14 The sower sows the word. 15 And these are they by the way side, where the word is sown; but when they have heard, Satan comes immediately, and takes away the word that was sown in their hearts. 16 And these are they likewise which are sown on stony ground; who, when they have heard the word, immediately receive it with gladness; 17 And have no root in themselves, and so endure but for a time: afterward, when affliction or persecution rises for the word's sake, immediately they are offended. 18 And these are they which are sown among thorns; such as hear the word, 19 And the cares of this world, and the deceitfulness of riches, and the lusts of other things entering in, choke the word, and it becomes unfruitful. 20 And these are they which are sown on good ground; such as hear the word, and receive it, and bring forth fruit, some thirty times, some sixty, and some an hundred.

Verses seven and nineteen are personal to me. I was one of those who had the thorns grow up around them and didn't yield any fruit for a very long time.The cares of this world and the lusts of other things entered into me and choked off the word. Eventually, I returned to Jesus. My life was a thorny mess. He didn't care. He welcomed me back the moment I knocked on his door and asked to come back into his family.

Today, that original seed is in good ground and yielding fruit. My ride with Jesus is amazing. He has taken the broken pieces of my life, assembled the pieces into a new shape, and called me to be his servant through motorcycle ministry and writing. Today, I am obedient to Jesus' call to be his servant and doing my best to sow seeds for Jesus. 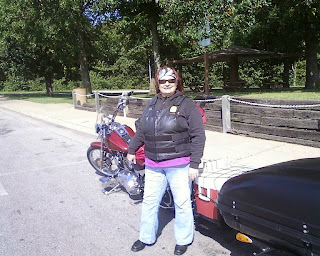 "God's time to help those that trust in him, is, when all other helpers fail."         Matthew Henry 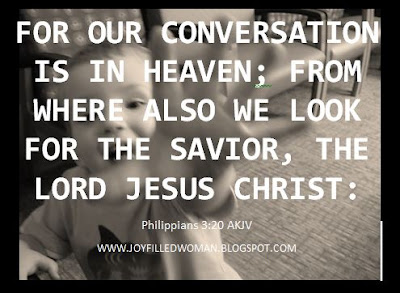 Toddlers focus completely on what they are reaching for. It doesn't matter if it is out of their reach, a toddler will continue to stretch and reach for the desired object.  In the same way, followers of Jesus need to focus completely on Jesus. He is the prize. Our conversations should reflect this focus. Cursing, gossiping, and bad mouthing have no place in the lives of Christians. Are we perfect? No. However, we should be striving to be more like Jesus. Keep your focus on Christ, not on the earthly temptations that surround us. Have the focus of a toddler. 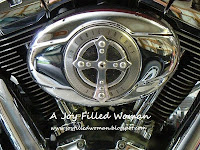 Email ThisBlogThis!Share to TwitterShare to FacebookShare to Pinterest
Labels: relationship

Driving in the Fog

The weatherman said that conditions were favorable for the formation of black ice and a heavy fog was blanketing our area.

I drove significantly slower than usual. The visibility varied from a hundred feet to half a mile. Occasionally, twin pinpoints of light would appear from the fog and a vehicle traveling east would emerge from the misty blanket of moisture. Carefully, through the enshrouding fog, I scanned the pavement ahead for frosted or shiny areas that would indicate ice.

As I drove through the fog, my thoughts turned to Jesus.
When life wraps around us and we can't see more than a few feet in front of us, slow down and know that Jesus is there. He is going to keep us from running into obstacles and sliding off the road. Trust Him. Have faith.

Proverbs 2:8 NIV
for he guards the course of the just and protects the way of his faithful ones.

Psalm 66:9 NIV
he has preserved our lives and kept our feet from slipping.

Psalm 121:2-3
My help comes from the LORD, the Maker of heaven and earth.He will not let your foot slip-- he who watches over you will not slumber;

On Monday,  I was driving to work and listening to SpiritFM. The music program changed to a Christian-Middle Eastern comedian, named Nazareth. Wow, he is funny! Immediately after arriving home, I searched YouTube for videos and found this video from July 2015. The performance is at the Dream Center in Los Angeles, California and lasts about a half hour. The end of the video includes a call to follow Jesus with a prayer included.
Posted by SalleeB at 6:22:00 AM No comments: Links to this post 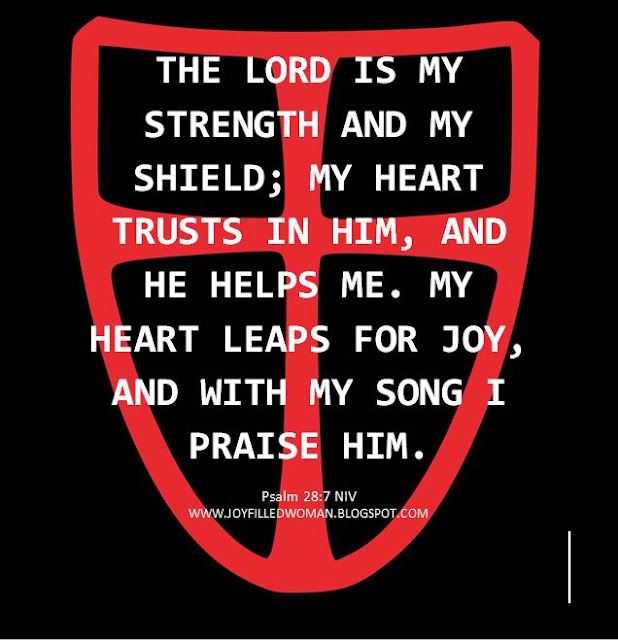 Email ThisBlogThis!Share to TwitterShare to FacebookShare to Pinterest
Labels: commitment, praise, Psalm of the Week 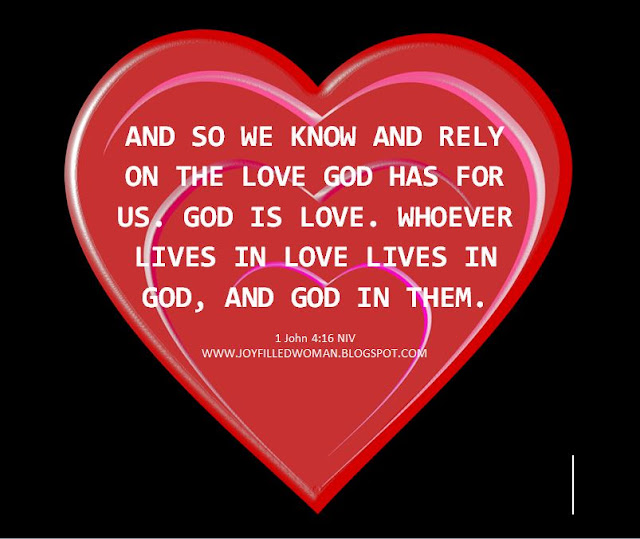 Email ThisBlogThis!Share to TwitterShare to FacebookShare to Pinterest
Labels: love, promise, Verse of the Week 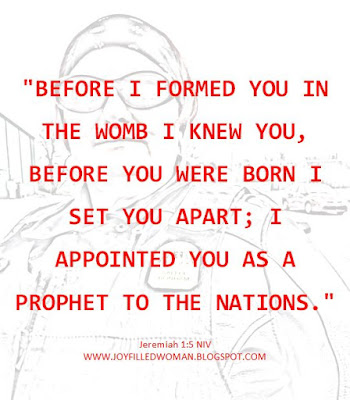 God had a plan for Jeremiah. God has a plan for you. The choices we make effect the plan that God has for us. I went off the path when I became lonely and decided to "lower my standards" to be in a relationship.

Months later, my fiancee broke our engagement and I was heart broken. However, I reached out to my heavenly Father, sat in the shadow of his feet for a while, and paid attention to my relationship with Him.

Oddly, I felt as if the months I had spent outside of God's plan had never happened. As a widow, I made a choice to be single and devoted to God for one year. I needed to heal from my husband's death. Jumping into a relationship because I was lonely didn't heal me, it hurt me.
. A Joyce Meyer message entitled, Hanging On the Vine." helped me make my decision to devote a year to the Lord. That year was amazing. I studied my Bible, grew in biblical knowledge, and deepened my relationship with Jesus.

Jesus loves us so much more than we can imagine. He died for me on a cross. He died for you on a cross. Reach out to Jesus today and make him the focus of your love. The rewards are worth it.
Posted by SalleeB at 6:27:00 AM No comments: Links to this post

Email ThisBlogThis!Share to TwitterShare to FacebookShare to Pinterest
Labels: bible study, Verse of the Week 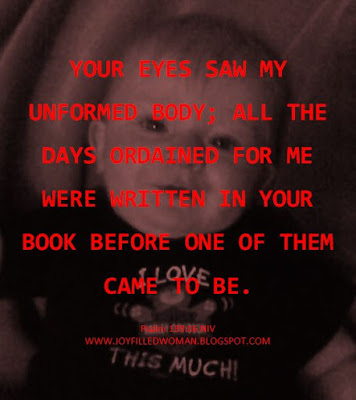