Preaching During a Controversy by C.H. Spurgeon

"If we are to survive and go on preaching in an atmosphere of controversy, there comes a point where you have done your best to weight the claims of your critics and take them to heart and must now say, "By the grace of God, I am what I am." And bring an end to the deranging second-guessing that threatens to destroy..."  C.H. Spurgeon

Email ThisBlogThis!Share to TwitterShare to FacebookShare to Pinterest
Labels: evangelism 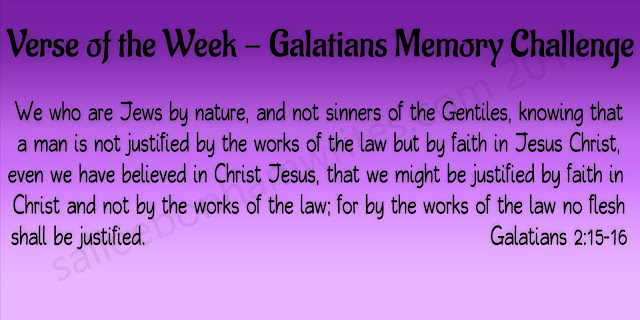 What did we believe in Christ for? Was it not that we might be justified by the faith of Christ? And, if so, is it not folly to go back to the law, and to expect to be justified either by the merit of moral works or the influence of any ceremonial sacrifices or purifications?         Matthew Henry's Complete Bible Commentary 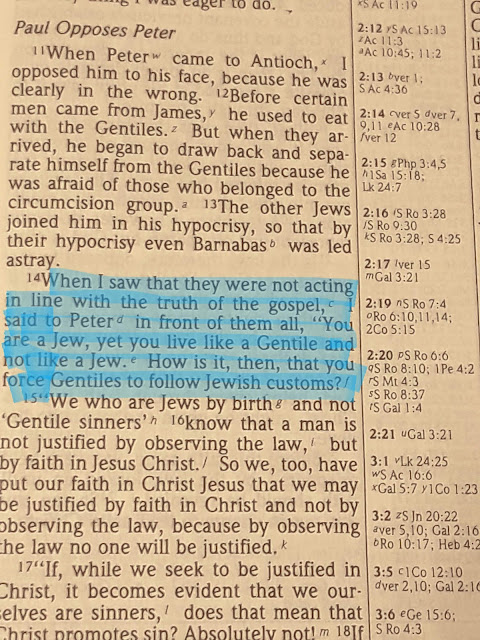 Last Week I Wrote
Paul felt he was standing up for the gospel of Jesus against the hypocrisy of the apostle Peter who was a pillar of the Jewish Christians.
The hypocrisy Paul spoke of was that Peter had been eating with the Gentile believers on a regular basis, but had stopped when the men sent by James arrived in Antioch.

Paul stated earlier in Galatians that Peter was afraid of the Jewish circumcision group sent from James in Jerusalem and the other Jewish believers followed his example. I don't understand this because in Acts 10:11-29 Peter was given a vision or dream from God to teach him that nothing God creates is unclean or impure. He even stated this to Cornelius the Centurion when he arrived at Cornelius' house.


While talking with him, Peter went inside and found a large gathering of people. 28He said to them: “You are well aware that it is against our law for a Jew to associate with or visit a Gentile. But God has shown me that I should not call anyone impure or unclean. 29So when I was sent for, I came without raising any objection. May I ask why you sent for me?”

No wonder Paul thought Peter was a hypocrite!

We are living under grace through Jesus Christ, not legalism.
The phrase "in front of them all" tells me that Paul wanted everyone to hear what he had to say and for there to be clarity on his position about the issue of Gentile believers being required to follow Jewish law and for Jewish believers to continue to follow Jewish law in the matter of eating or "hanging out" with the Gentile believers. Paul had already emphasized that "His authority was from Jesus by revelation." (Galatians 1:12)

The authority of Jesus, as expressed in the Bible must be the guide I use in all situations.

What was Paul's "thorn in the flesh?"
No one knows what Paul was referring to. Scholars think it was a vision issue or some other physical problem. As for me, I think it could have been his regret for being a great persecutor of the church. (Galatians 1:13) After all, he was going to Damascus to search for Christians to put in prison when he met Jesus on the road and had his personal revelation. (Acts 9)

I am basing my opinion about Paul's thorn in the flesh on what I know about my own life before Jesus. I love Jesus. I know Jesus loves me. Still, I find it hard to forgive myself for my before-Jesus-life of sex and drugs.

Paul put men and women in prison for following Jesus. I can't imagine how awful it was for those people being in a cell with no sanitation, no beds, and meager amounts of food. I am sure he regretted having done these things just like I feel regret over having been a party girl who liked to work hard and play hard.

Yes, I think Paul lived the rest of his life trying to make up for having been such a zealous persecutor. I believe that is why Jesus chose him to be the apostle to the Gentiles. Saul was educated, focused, and committed to following his beliefs. The qualities that made him such a zealous persecutor also became his greatest strengths as an apostle for Jesus. 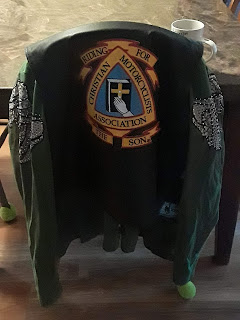 Whew! This week has been an on-the-knees, pray the word aloud week!
Bill and I went to the 4 way stop in the center of town Thursday evening to pray for our community. This is the third month and three of us showed up. Bill and I wore our eye-catching Christian Motorcyclists Association colors so that passing folk would know we were there for Jesus. Bill, Sundi Jo and I received a lot of looks from people as we prepared to pray on the east corner of the 4 way for our community and the surrounding communities. It is my hope that someone will ask one of us," I saw you at the 4 way stop. What were you doing?" When this happens we can have a conversation about prayer and Jesus. Yep, this is evangelism outreach and/or discipleship my friends.
This is also spiritual warfare.
What do you believe about spiritual warfare? I believe we live in Satan's world and that we are in a battle to bring people to Jesus Christ. This is the great commission: to go and tell people about Jesus Christ in the world around us. When we follow this way of life, we will run into the enemy, the ruler of this world whom even Jesus had to face and defeat. Our enemy's mission is to keep people from coming to know Jesus Christ as their Lord and Savior. He wants to keep you in the dark, literally and figuratively. To this end, he places obstacles in the paths of believers to try and separate us from our Jesus by keeping us busy, swamped with drama, and overrun with temptations. Satan also places obstacles in the paths of unbelievers who are beginning to see the light of Jesus and begin walking toward him.
Grabbing my Shield and Sword
I have been grabbing my shield of faith and Sword of the Spirit all week to extinguish the flaming arrows of the enemy who is trying to discourage a sister in ministry, trying to keep a lamb of God from completely breaking free of Satan's chains, and to stop the umbrella of prayer from being lifted within the center of our community.
Yes, I have been engaged in spiritual warfare all week AND I believe my prayers are answered. Did you catch that? My prayers ARE answered - maybe not today, tomorrow, or a month from now, but they will be answered in God's timeframe. This is faith in action. This is submitting to God. This is knowing who I am; I am a child of God and he is always good.
Yes, I know that I sound like a crazy person to many of you.
I don't care. I know who I am through Jesus Christ and I believe the Bible is the inspired word of God. Yes, I am a spirit-led, redeemed follower of Jesus Christ and I know who I am through Jesus Christ.
Do you know who you are in the kingdom of God?
The New Testament tells us who we are through Jesus Christ. The Old Testament tells us the history of God's people and why he sent Jesus as the Messiah. If you don't know Jesus or who you are as a Christian, read the New Testament to discover the truth of letting Jesus into your life.
For the message of the cross is foolishness to those who are perishing, but to us who are being saved, it is the power of God.
fixing our eyes on Jesus, the pioneer and perfecter of faith. For the joy set before him he endured the cross, scorning its shame, and sat down at the right hand of the throne of God.
16And I will ask the Father, and he will give you another advocate to help you and be with you forever— 17 the Spirit of truth. The world cannot accept him, because it neither sees him nor knows him. But you know him, for he lives with you and will be in you.
Put on the full armor of God, so that you can take your stand against the devil’s schemes. 12 For our struggle is not against flesh and blood, but against the rulers, against the authorities, against the powers of this dark world and against the spiritual forces of evil in the heavenly realms.
16 In addition to all this, take up the shield of faith, with which you can extinguish all the flaming arrows of the evil one. 17 Take the helmet of salvation and the sword of the Spirit, which is the word of God.18 And pray in the Spirit on all occasions with all kinds of prayers and requests. With this in mind, be alert and always keep on praying for all the Lord’s people.
You, dear children, are from God and have overcome them, because the one who is in you is greater than the one who is in the world.
So you are no longer a slave, but God's child; and since you are his child, God has made you also an heir.
Submit yourselves, then, to God. Resist the devil, and he will flee from you.