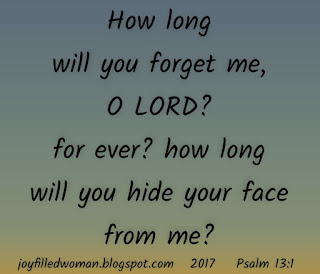 The psalmist complains that God had long withdrawn.
God sometimes hides his face, and leaves his own children in the dark concerning their interest in him: and this they lay to heart more than any outward trouble whatever. But anxious cares are heavy burdens with which believers often load themselves more than they need. It is a common temptation, when trouble lasts long, to think that it will last always.
Those who have long been without joy, begin to be without hope.
If we bring our cares and griefs to the throne of grace, and leave them there, we may go away like Hannah, and our countenances will be no more sad, 1Sa 1:18. adapted from Matthew Henry's Concise Bible Commentary
Posted by SalleeB at 7:11:00 PM No comments: Links to this post

Email ThisBlogThis!Share to TwitterShare to FacebookShare to Pinterest
Labels: Psalm of the Week 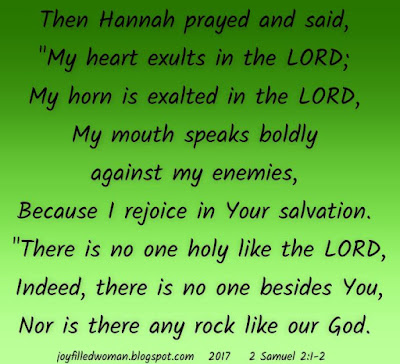 Are you praising the Lord?
Hannah's heart rejoiced, not in Samuel, but in the Lord. She looks beyond the gift of a son, and praises the Giver who answered her prayer. She rejoiced in the salvation of the Lord. Praise God no matter what your circumstances are. Let the Lord be your rock, or foundation, for your life. When you base your life upon the rock that is God, your faith will be unshakable in all circumstances.
Are we rich?
Yes, we are rich in faith. Praise the Lord for what he has done and will do in your life. Trust him in the same way that Hannah trusted him.
God Chooses Differently Than Man
He respects not man's wisdom or fancied excellencies, but chooses those whom the world accounts foolish, teaching them to feel their guilt, and to value his free and precious salvation. adapted from Matthew Henry's Bible Commentary
Posted by SalleeB at 6:51:00 PM No comments: Links to this post

Sitting is a resting posture:
after services and sufferings, to give law, to give judgment. It is a remaining posture: he sits like a king for ever.
All his enemies are now in a chain, but not yet made his footstool.
And his kingdom, being set up, shall be kept up in the world, in despite of all the powers of darkness.
Has the gospel of Christ been to us the power of God in to salvation?

To those who are thus changed, the Saviour's sacrifice, intercession, and blessing belong to the the Lord through Jesus Christ.
adapted from Matthew Henry's Bible Commentary
Posted by SalleeB at 7:28:00 AM No comments: Links to this post

Email ThisBlogThis!Share to TwitterShare to FacebookShare to Pinterest
Labels: behavior, promise, Psalm of the Week, salvation

World-Wide Worship
Wouldn't it be nice if the "www" in the computer address bar stood for "world wide worship"? How powerful world-wide worship would and can be.
One in Christ Jesus
The children of God are a world-wide family. We are not separate sections of the family of God, contained within many church bodies. No, we are one, world-wide body of Christ. At least we are when we engage in prayer and worship at the same time.
One in Unity and Faith
If we focus on worshipping the Lord in unity and faith, can you imagine the effectiveness of our spiritual battle against Satan on a world-wide scale?

The Hearts of Men 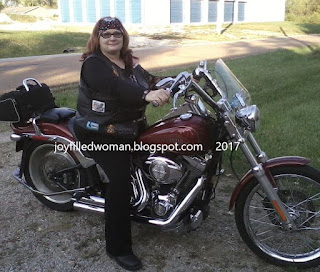 The Lord knows the hearts of men.
He is the potter and we are his clay. He knows about those who worship with their mouth and speak of his love, but have a heart that is far removed from him. He knows what they are hiding in secret. Never doubt that he doesn't understand that the world around us is turned upside down. Our job is not to doubt, but to believe in the Word of God with all of our heart and to be joyful no matter what happens around us.

The Lord Sees the Hypocrites and Sinners
Isaiah 29:13
Why the Lord said, For as much as this people draw near me with their mouth, and with their lips do honor me, but have removed their heart far from me, and their fear toward me is taught by the precept of men:

Isaiah 29:15
Woe to them that seek deep to hide their counsel from the LORD, and their works are in the dark, and they say, Who sees us? and who knows us?

Rejoice- The Deaf and the Blind WILL See
Isaiah 29:17-19
Is it not yet a very little while, and Lebanon shall be turned into a fruitful field, and the fruitful field shall be esteemed as a forest?

And in that day shall the deaf hear the words of the book, and the eyes of the blind shall see out of obscurity, and out of darkness.

The meek also shall increase their joy in the LORD, and the poor among men shall rejoice in the Holy One of Israel
.
Isaiah 29:24
They also that erred in spirit shall come to understanding, and they that murmured shall learn doctrine.
Posted by SalleeB at 6:26:00 AM No comments: Links to this post

For there is no faithfulness in their mouth
Today, you can find biblical standards in the media, but you have to look carefully for it. However, this isn't a media problem, but a social problem.
Media is viewer-driven.
It is all about the numbers. If the numbers go down, changes are made. Apparently most viewers would rather see sex, drugs, and unfaithfulness on their tablets, phones, computers, and televisions than wholesome and godly programs.
Are you supporting ungodly media by watching, rather than boycotting them?
Their inward part is very wickedness

People are adept at hiding what they are doing in their personal lives. Ask the Lord for discernment so that you will know who is sincere and who is not. Don't let the outside appearance of people catch you off guard. Pray for discernment and expect to receive it. The Holy Spirit will give you discernment.
Their throat is an open tomb

Cursing makes me wince inwardly. In my before-Jesus life, I cursed quite well. I was in the Navy and sailors are known to curse right? This was my excuse for cursing. Today, cursing makes me wince inwardly because through Jesus Christ, I have become a new person. As a new creation through Jesus Christ, I want to speak encouragement and healing words, not negativeness and ugliness.
They flatter with their tongue.

The comedian and actress Mae West liked to say, "Flattery will get you everywhere." This is a truism because flattering people can make them want to help you. It may not work all the time, but it will work pretty well.Therefore, the motive behind flattery is that the flatterer wants something from you. It might be your time, money, or a commitment, but they are flattering you to get something in return.
Compliment or Flattery?
My husband likes to compliment people. However, the only motive he has is to make them feel good because someone said something positive to them. Motive is the difference between flattery and compliments. The flatterer wants something in return, but the complimenter is trying to encourage and uplift the person they are complimenting. Brothers and sisters, make sure you are speaking compliments rather than flattery.
Posted by SalleeB at 3:39:00 PM No comments: Links to this post

Email ThisBlogThis!Share to TwitterShare to FacebookShare to Pinterest
Labels: behavior, Psalm of the Week, values 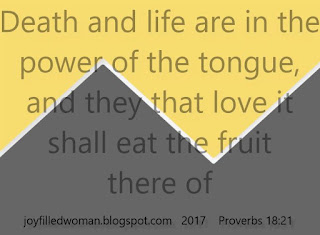 Satan's goal is to divide the children of God.
Speaking of division and troubles within the body of the church is only giving power to the problem. Let your tongues speak of life, not negative issues. Don't let the fruit of your tongue be destructive. The consequences of speaking negatively within the church body about each other can and will fracture the family of God.

The children of God are a world-wide family.
We are not separate sections of the family of God, contained within many church bodies. No, we are one, world wide body of Christ. If we focus on speaking only of unity and faith, can you imagine the effectiveness of our spiritual battle against Satan on a world-wide scale?

Ephesians 4:4-6
There is one body, and one Spirit, even as you are called in one hope of your calling; One Lord, one faith, one baptism, One God and Father of all, who is above all, and through all, and in you all.
John 17:21
That they all may be one; as you, Father, are in me, and I in you, that they also may be one in us: that the world may believe that you have sent me.
Galatians 3:28
There is neither Jew nor Greek, there is neither bond nor free, there is neither male nor female: for you are all one in Christ Jesus.
Posted by SalleeB at 8:29:00 AM No comments: Links to this post

Email ThisBlogThis!Share to TwitterShare to FacebookShare to Pinterest
Labels: behavior, spiritual battle, Verse of the Week 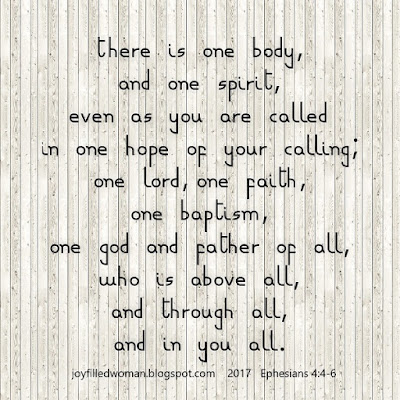 Satan's goal is to divide and conquer the followers of Jesus Christ.

Don't let man-made labels inspire you to separate yourself from the one body of Christ. We are all part of that body. God is above all, and through all, and in you all.

Don't listen to the whispers of the Enemy. His specialty is causing division and dissension within the church body. Quit listening to his lies.

We all have the one Spirit and are called in the one hope. We have one Lord and one faith. Stay united in your purpose. Do not let Satan divide you from your church and then conquer you because you don't have any support.
Posted by SalleeB at 6:31:00 AM No comments: Links to this post