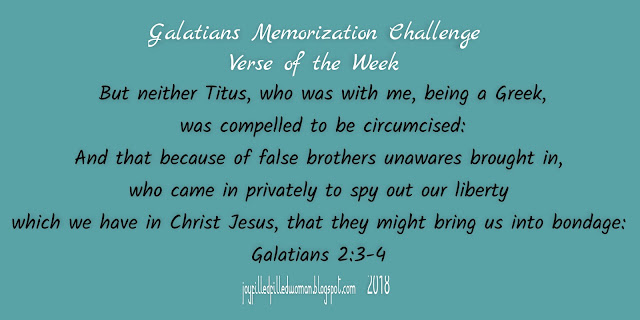 Paul shares that this was a crucial case because Titus was a Gentile.
In fact, Titus' parents were both Gentiles, unlike Timothy who had one Jewish parent and was therefore capable of being identified with the Jewish people.

On the other hand, Titus was an uncircumcised Greek Gentile who was accompanying Paul and assisting in his ministry.

"The "false brethren," Ga 2:4 ("certain of the sect of the Pharisees which believed," Ac 15:5), demanded Titus' circumcision. The apostles, however, constrained by the firmness of Paul and Barnabas (Ga 2:5), did not compel or insist on his being circumcised. Thus they virtually sanctioned Paul's course among the Gentiles and admitted his independence as an apostle: the point he desires to set forth to the Galatians." Jamieson-Fausset-Brown Bible Commentary


Paul brought Titus about with him as a living example of the power of the Gospel upon the uncircumcised heathen.   Jamieson-Fausset-Brown Bible Commentary
Posted by SalleeB at 10:08:00 PM