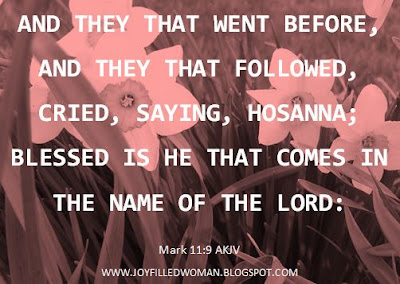 The beginning of Jesus' last week as a living man.
Jesus entered Jerusalem riding a donkey. People threw their robes on the ground in front of his donkey and shouted, "Hosanna!" Some had seen, or heard Jesus' teachings, miracles, and healings. Most of the crowd believed Jesus was going to be their king on earth. This misunderstanding helped to set up the events that led to Jesus' death on a cross in six days.

The Roman regional government and the Jewish Pharisees took notice of the shouting throng surrounding Jesus' ride into Jerusalem.
Rome didn't want civil unrest and the Pharisees didn't want an errant teacher to supplant their leadership as a king. There two factions both saw Jesus as a threat. Jesus' days were numbered.

Email ThisBlogThis!Share to TwitterShare to FacebookShare to Pinterest
Labels: bible study, Jesus, Verse of the Week