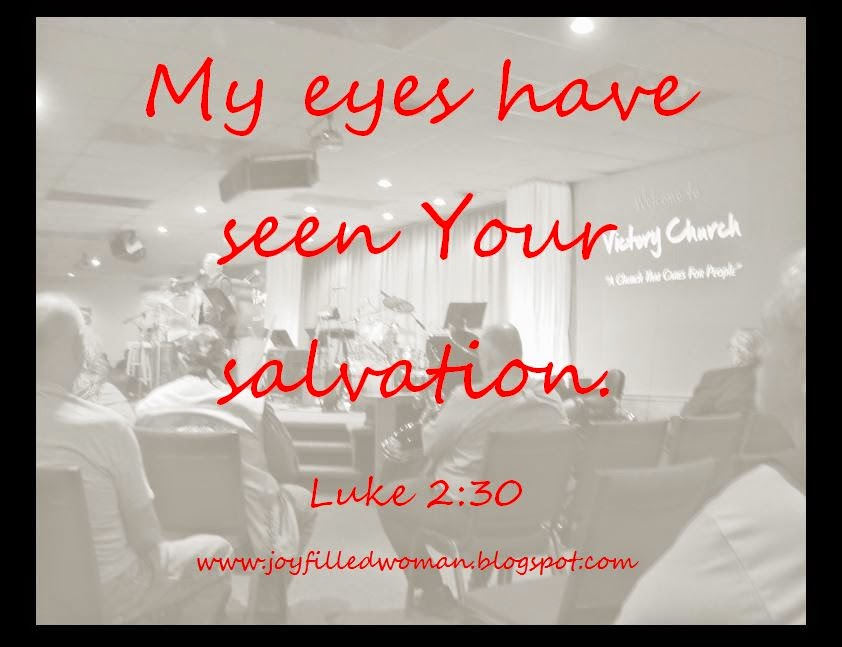 I believe that this verse needs to be read in context to fully understand what is being said:

The Prophecy of Simeon

25 And, behold, there was a man in Jerusalem, whose name [was] Simeon; and the same man [was] just and devout, waiting for the consolation of Israel: and the Holy Ghost was upon him. 26 And it was revealed unto him by the Holy Ghost, that he should not see death, before he had seen the Lord's Christ. 27 And he came by the Spirit into the temple: and when the parents brought in the child Jesus, to do for him after the custom of the law, 28 Then took he him up in his arms, and blessed God, and said, 29 Lord, now lettest thou thy servant depart in peace, according to thy word:

Simeon knew who the child Jesus was. Jesus was God's Salvation. Many people saw Jesus, but few of them really understood who it was they were listening to, or following.

Gill's Bible Exposition states this in a wonderful way:


"...He goes by the name of "salvation", because the salvation of God's elect is put into his hands, and he has undertook it; and because he is the author of it, he has fulfilled his engagements, and has accomplished what he promised to do; and because salvation is in him, it is to be had in him; and in him the true Israel of God are saved, with an everlasting salvation: and he is called "God's salvation" because he is a Saviour of his choosing, calling, and constituting; whom he promised under the Old Testament dispensation and in the fullness of time sent; and who now appeared in human nature, and whom good old Simeon now saw, with his bodily eyes; a sight which many kings and prophets had desired, but were not favoured with; and also with the eyes of his understanding, with the spiritual eye of faith, as his Saviour and Redeemer; for without this, the former would not have been sufficient to have given such peace and tranquillity of mind, in a departure out of this world: for many saw him in the days of his flesh, who never saw his glory, as the Son of God, and Saviour of sinners;..."

Jesus is my salvation.
Today, I feel peace and tranquillity of mind every day. Why? Because I know exactly where I am going when I die. I am going home to my Redeemer, Jesus Christ. Nothing is more important to me than following God's plan for my life.

Yes, I have hectic, stressful days.
After all, I am an imperfect human being who is trying to follow Jesus' example and teachings, but I still have to deal with traffic, other people, taxes, etc. However, I can meet each daily challenge with an inner core of unshakable faith that gives me peace of mind.
Posted by SalleeB at 5:00:00 AM

Email ThisBlogThis!Share to TwitterShare to FacebookShare to Pinterest
Labels: bible study, faith, Verse of the Week