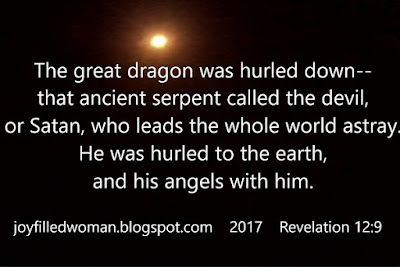 The Dragon, or Satan
Satan is a leader who prefers to use his own wisdom in achieving his goals and believes he needs no one. His rebellion against his creator shows the full extent of his self-will.

Satan is willing to say or do anything in order to have his way.
He befriends people and uses power, money, and material things to achieve his goals. He appears to be a wise counselor who wants only the best for his friends, but in reality he is only interested in creating death, destruction, and famine.

We are living in a spiritual battleground.
For everything in the world – the cravings of sinful man, the lust of his eyes, and the boasting of what he has and does – comes not from the Father but from the world. Let us not be deceived. Satan is powerful as the “god of this age” BUT disciples of Jesus Christ need not cower before him in fear, BECAUSE “He who is in you is greater than he who is in the world." (1 John 4:4)

from the short bible lesson, "Superhero Discipleship" by Sallee Bonham