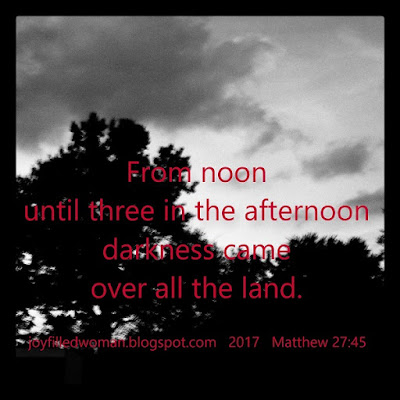 Today, Bill and I stood in darkness for about two minutes.
All was still. No vehicles were heard. Tree frogs and insects could be heard as the dusk to dawn light came on. As we stood in total darkness at 1:15 P.M., we wondered if this is what it was like the day Jesus was crucified.

Matthew wrote that the land was in darkness from noon until three.
It wasn't an eclipse that day because Jesus was crucified during the full moon. However, other writers than the biblical ones also recorded that a supernatural darkness occurred on the day Jesus was crucified.


The only cause of this was the interposing power of God - furnishing testimony to the dignity of the sufferer, and causing the elements to sympathize with the pains of his dying Son.

It was also especially proper to furnish this testimony when the "Sun of righteousness"was withdrawing his beams for a time, and the Redeemer of men was expiring.

A thick darkness, shutting out the light of day, and clothing every object with the gloom of midnight, was the appropriate drapery with which the world should be clad when the Son of God expired.

This darkness was noticed by one at least of the pagan writers. Phlegon, a Roman astronomer, speaking of the 14th year of the reign of Tiberius, which is supposed to be that in which our Saviour died, says "that the greatest eclipse of the sun that was ever known happened then, for the day was so turned into night that the stars appeared.

Barnes' Notes on the Bible