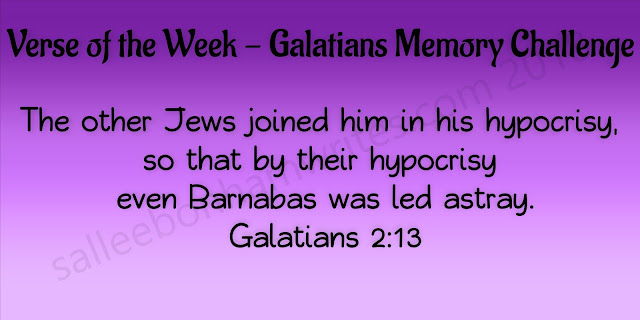 What is popular isn't always right and what is right isn't always popular.
This slogan is what I thought of as I read Galatians 2:13. I use this slogan to teach kids to stand up for what is right, not for what is popular.
Paul felt he was standing up for the gospel of Jesus against the hypocrisy of the apostle Peter who was a pillar of the Jewish Christians.
The hypocrisy Paul spoke of was that Peter had been eating with the Gentile believers on a regular basis, but had stopped when the men sent by James arrived in Antioch.

Paul stated earlier in Galatians that Peter was afraid of the Jewish circumcision group sent from James in Jerusalem and the other Jewish believers followed his example. I don't understand this because in Acts 10:11-29 Peter was given a vision or dream from God that nothing God creates is unclean or impure. He even stated this to Cornelius the Centurion when he arrived at Cornelius' house.


While talking with him, Peter went inside and found a large gathering of people. 28He said to them: “You are well aware that it is against our law for a Jew to associate with or visit a Gentile. But God has shown me that I should not call anyone impure or unclean. 29So when I was sent for, I came without raising any objection. May I ask why you sent for me?”

No wonder Paul thought Peter was a hypocrite!

Satan must have been doing a happy dance when Barnabus decided to follow Peter's example and stop eating with the Gentile Christians too.

If you knew your friends and family would suffer because of your actions, what would you do? Would you follow the gospel or back off from the gospel?

Division in the Church
Division in the church isn't new; it goes all the way back to the division between Gentile Christians and Jewish Christians in the churches at Jerusalem and Antioch.
Division is a tool that Satan uses to distract Christians from being a servant of Jesus and carrying out the Great Commission of reaching out to people who haven't heard about Jesus. In short, Satan is trying to stop the number of people who come to know Jesus as their Lord and Savior. This has been and still is Satan's mission today.

Email ThisBlogThis!Share to TwitterShare to FacebookShare to Pinterest
Labels: bible study, Jesus, Verse of the Week