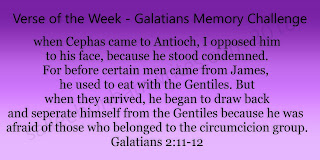 Typed error in the picture: circumcicion should be circumcision
Paul opposed Peter because he wouldn't take a stand.
Peter had been following Paul's example of eating with the Gentiles and fellowshipping with them. However, he changed when the strictly Hebrew faction or circumcision group arrived in Antioch.
Paul was 100% about sharing Jesus' teachings with the Gentiles and he wasn't happy with Peter for changing his actions and behaviors to make the circumcision group happy.
Paul said Peter was afraid.
Peter hasn't changed much, has he? He is still the disciple who said he would NEVER fall away from Jesus or deny him. However, Peter fulfilled Jesus' prediction and denied Jesus three times before the rooster crowed after Jesus was arrested. Matthew 26:34  Peter's experience didn't change his later actions did it? He knew Jesus personally and was one of the first disciples to be chosen, but this just illustrates to me how the Lord chooses a weak vessel to accomplish his will.
Posted by SalleeB at 7:29:00 AM

Email ThisBlogThis!Share to TwitterShare to FacebookShare to Pinterest
Labels: behavior, bible study, Verse of the Week